Game PPD due to zam issues has been rescheduled for 11/18.
Posted by Dannielle at 22:41

David Desharnais is a beast. Just, clearly, a beast.

I can't figure out how Bryan Schmidt is putting so many points on the board. He.is.awful. But to his credit, I said his name in vain much fewer times last night than preseason or the opener last week. (Please note the -1 though. kthxbye.)

Also, those game notes on the Cyclones' home page? Basically the coolest thing ever. You know, if you're obsessed with statistics like I am.

That is all. See you all tonight (in costume).
Posted by Dannielle at 15:15 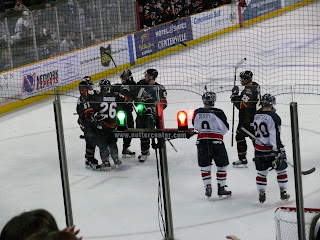 When I'm less tired and more coherent, I'll break down my $0.02 on the game. In the mean time, have the single best photograph I took all evening (and I took like, 500).

Post article from Saturday about Mathieu Aubin & the team.

Enquirer article from Friday about the opener & Avery Wilson.

Hopefully this is a sign of things to come.

Update (3:04pm): Another good article out of the Dayton Daily News about Bomber Jason Goulet meeting his former team tonight.
Posted by Dannielle at 11:00

Notably missing is late arrival Matt Syroczynski, a 6'5" 225-pounder who amassed 41 points in 73 regular season games and 106 penalty minutes with Fort Wayne of the UHL in 2006-07. Appears to be a force to be reckoned with.

On the eve of the opener

Ahhh, the season officially opens in less than 24 hours... unfortunately in Johnstown, not Cincinnati. But if you're interested in J-Town/Wheeling and all the accompanying fanfare, it's going to be free on the B2 Network.

Matt Rogers was released today. Steven Doherty was the only other cut following preseason. Also, Sean Perkins was placed on the 3-Day IR to start off the year. Opening Day rosters are due tomorrow afternoon, I'll be sure to post it when I get my hands on it.

For the two (I'm sure) disappointed folks who voted for John Smith in the goalie running, sorry you won't see him here, but Weber says he's trying out in the Mid-Atlantic league.

Anyone else impressed with Billy "The Killer" Irish-Baker? Two games, two fights. Not that he dominated in either, but he really stepped up in both and I give him mad props for doing so. Love to see that kind of play from a team, especially this early on. Last year's team was a lot similar - guys like Urquhart, Gleed, etc... who don't regularly fight - stepping up when somebody went down.

The Hockey News apparently has the Clones slated to finish 4th in the division and 16th overall. Hahahahaha. Because they're totally credible. Remember last year? Last year they chose them to finish 24th of 25.

Pictures: If you're looking for a photos from the two preseason games, I've posted a bunch right here. Nothing super impressive, but feel free to check them out if you've got the time.
Posted by Dannielle at 22:35

Musings from the Road

Hello from windy and cold Youngstown, OH. Our boys opened up preseason play tonight with a 4-1 win over the Steelhounds. The game opened slowly and after the end of 1 was tied at zero. Dov Grumet-Morris was in net and faced only 3 shots in the first period, but ended up with 14 on the night and only 1 (glove side high, of course) went in. He did look impressive, though. The team also did a simulated shootout after the game and Dover looked great. The Clones had something like 30 shots on former Wheeling netminder Andy Franck, and three of their four goals came in a 3 minute span. Two were by Matt MacDonald, two by newcomer Travis Fuller. Three of their goals were powerplay goals. In the second period, their power play looked incredible. Things clicked, passes were made. Very impressive. Hopefully that translates over into the regular season.

A few new players that made impressions: obviously Fuller with two goals; rookie Sean Perkins with two assists; former Storm forward Andrew Martin stepped up with some intense, high-speed play; Billy Irish-Baker was throwing his weight around well. One player I was not impressed with was defenseman Bryan Schmidt, he didn't skate well and looked like he was on a completely different page than the rest of the team. Sloppy.

Overall, they looked good. When I make it back to Cincinnati I'll be sure to link some pictures over if anyone's interested. Not sure if I'm making it to the Kettering game, if not - let me know how they look. :)
Posted by Dannielle at 23:18

Both training camp goalies (Lansdowne & Smith) were released (according to cycloneshockey.com we have 23 players in camp). Means we should be seeing both Grumet-Morris and Desjardins dressed tonight in Youngstown. If you can't make it be sure to listen to Hammer on cycloneshockey.com -- and check back here for a post-game update from Y-Town. Game time is 7:05.

The team also released their promo schedule... highlighted by Twister Bobbleheads (!!!!!), Nashville Predators Night, Montreal Canadiens Night, and the return of Faith Night (note: Grumet-Morris will be in net, whether you like it or not). Also, Wet Wednesday & Thirsty Thursdays are also back.

Only slightly-related note: The Bulldogs raise their Calder Cup Banner tonight in Hamilton vs the Amerks. :)
Posted by Dannielle at 12:52

I didn't make it to the scrimmage today but from what I hear there were a lot of different mini-games involved. The Cyclones' recap is here. The team plays Friday in Youngstown at 7pm at the Chevrolet Centre, the Section 136 crew is making the trip, so I will be sure to link some photos next week and come back bearing some real insight, finally. Look for an update late Friday or early Saturday with a game recap. If you can't make it Friday - the game is on B2.

We're also trekking to Cleveland on Saturday for the Hamilton/Lake Erie game, and I'll be sure to drop a few updates on how things are going for the Bulldogs. Not sure if this was mentioned, but Cyclones signee Gerard Miller is on a 25-game PTO with Hamilton and played his first AHL game on Friday. The season hasn't started yet and our players are already being sought after - hopefully it's a good sign. (Btw, they topped the Amerks 3-2, 0:39 into OT on a Maxim Lapierre goal.)

A few notes of interest... the first coach's show is on Monday the 15th at Jefferson Hall (Newport on the Levee). Need more info on Jefferson Hall? Show kicks off at 7pm (Happy Hour is 4-7, btw), and the place is family-friendly before 9pm (and in case you're of the older age bracket, there is a DJ at 10 on Mondays). If you can't make it, catch it on SuperTalk 96.5FM. Also, October 21st the Cyclones make an appearance at Kings Island... special discounts are available.

In the mean time... we're 11 days from Opening Night at the Nut House... any early observations??
Posted by Dannielle at 23:48 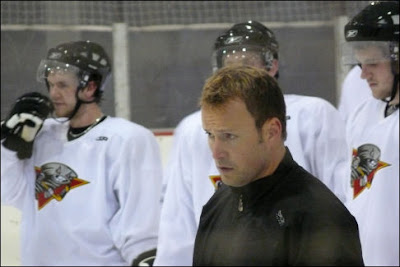 Coach Weber, Coach Stork, and the boys were on the ice this morning at Sports Plus in Day One of the 2007-08 Cyclones' training camp. The team will be back on the ice at 11am tomorrow and Sunday if you want to catch them in action. Don't forget - Tuesday at 4pm, the team will be scrimmaging.

2 weeks, 1 day until the road opener in Dayton!

Matt MacDonald was returned by Rockford to the team on Monday. More here.

And from released from Hamilton were Scott Reynolds & Barret Ehgoetz. Hamilton currently possesses 4 goalies - I'd look to see at least one be assigned in the next few days.
Posted by Dannielle at 22:37